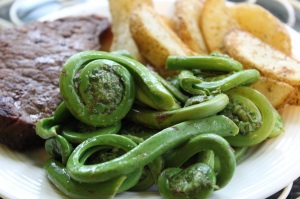 You’re probably wondering how the GRE went. Weeeell, not so great. My scores were okay, but when you’re competing with a lot of very talented people for a slot in a top school (or schools in my case) you need to present your best… Those scores were not my best. Before allowing the GRE and grad school applications to consume me for a second round, however, I had to drown my disappointment in something. Emilie and Tom helped with the liquid refreshment stage. The shoe stage did not go to well, but the foodie stage, on the other hand, went amazing! After all those weeks of not being able to enjoy cooking, I was so ready to do something fun. Wegman’s was more than happy to oblige with a surprise stock of…fiddleheads!

I had never seen a fiddlehead in person before, but I have stared in wonderment at them over many a glossy food magazine. Kind of weird looking, aren’t they? They remind me of

snail shells, but most prefer to describe them after their namesake: the curled head of a violin (or fiddle!). These suckers are pretty pricey, too! $9.99 a pound down this way. Since I had never had them before, I decided to be safe and bought half a pound. Who wants to spend $10 for a pound of something you’re not even sure you’ll like, right?

It’s a good thing I picked them up when I did. Fiddleheads, it turns out, have a

short window of opportunity. If you did not know already, these little guys are basically baby ferns. A fiddlehead harvester has to catch them before they unfurl into mature , bitter adults. From what I read online, the season starts in April. By June, any unharvested ferns are all grown up and no longer fun to eat. That means by the time my FAFSA paperwork is due, they’ll likely be gone until next year!

So what to do if you happen to come across some fiddleheads? Number one, you do NOT eat them raw.  According to The Kitchn, deer are the only mammals that 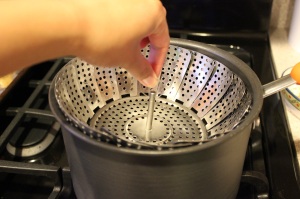 can eat raw fiddleheads. The rest of us would experience some tummy troubles. No worries, a simple trip into a steamer knocks those toxins out of the danger zone. You’ll want to give them a good rinsing first, though, and trim off any browned ends. The fiddleheads I had were already chaff free, but if you find some that have a brown, papery fuzz be sure to remove it before cooking as well.

When you take the lid off of the steamer, the fiddleheads smells like a forest after a summer rain. Very earthy and very grassy. It was oddly a rather relaxing smell.  Rather than bury the greens in a dish with complex flavors (apparently they are popular in Asian curries), I decided to go the simple route. A little bit of butter, a squeeze of lemon, and a pinch of salt.

When it came to take the first bite, I did hesitate a little. They look funny, remember? I overcame that quickly and had quite the delightful experience. You know how veggies like broccoli, asparagus, green beans, snow peas, and sometimes even lettuce can have a slight metallic flavor ?( Or at least, they do for me) . Well, the fiddleheads tasted a lot like those green vegetables, but a far more delicate version of any of them.  They are usually described as having an asparagus like flavor, but I found it more to have the texture of an al dente hericot vert and the flavor of broccoli (sans the metallic part).

So, if you are looking to indulge in a side dish for a special dinner, or just to treat yourself, I highly recommend giving fiddleheads a try! They are definitely a fun food. 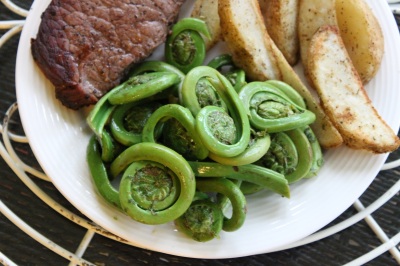 This entry was posted in Cooking, Food and tagged fiddleheads, For One, Healthy, Light Fare, Local Food, quick and easy, Side Dish, vegetables. Bookmark the permalink.

6 responses to “Fiddlehead Ferns for a Fun Foodie Friday”